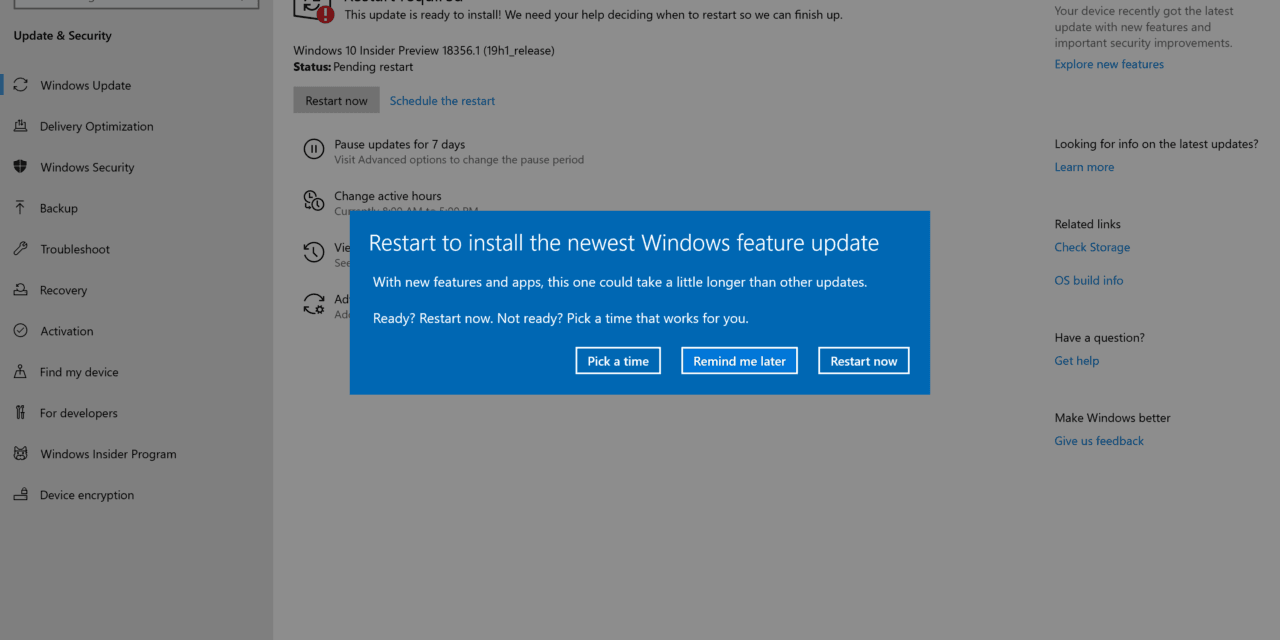 Over the past few weeks, we have seen a regular routine of Fast Ring builds for Windows 10 (19H1), including Build 18351 and 18353 last week, being pushed out to Windows Insiders.

As I have stated before, this is exactly what we want to be seeing at this point in the development of the seventh feature update for Windows 10 because we are just a couple of weeks away from what should be the final build for this update.

Today’s new build, 18356, actually has an indicator that brings us one step closer to that stage as the desktop watermark is now gone in this testing builds release.

The removal of the watermark does not mean this is the final build of the April 2019 Update. In fact, it is far from it as we have seen in past feature update development cycles. What is does mean is that we are getting closer to that point but as many of you already know, Microsoft will not make a formal announcement that any given build is the final one for this update.

However, plenty of the sites that track these builds and write about them will start to tell you why this build or that build is the final one. Bottom line, is that a build that makes its way from the Fast Ring, then to the Slow Ring and then the Release Preview Ring will likely be that final build. Of course, that is all subject to change at any given time because they are pre-release builds until that update hits Windows Update for seekers.

In the interim though, we can also see with the release notes for Windows 10 (19H1) Build 18356 that the list of known issues has shrunk to just four items and that list has been getting smaller over the last few builds. Again – exactly what we expect to happen at this point in the feature updates development cycle.

One thing that is being highlighted with this builds release is the introduction of Screen Mirroring with the Your Phone app. There are a few hurdles to use this new capbility though at this early stage:

Of course the phone and PC must be within Bluetooth range to work.

Note: Here are instructions on how to check if your PC supports the low energy peripheral capability.

If all of the above items are lined up for you then Screen Mirroring should work. The basic premise behind this capability is to interact with your phone based Android apps on your computer screen using keyboard and mouse. Touch is also an option but does not work in this early release.

Be aware – there are some known issues for Screen Mirroring in the Your Phone app:

So if you are trying this out, please let us know in the comments how things are working. This is a capability I am really looking forward to trying out.

Finally, as I have been doing since late last year when Reserved Storage for Windows 10 was introduced, I have an update for the usage tracking for this feature. Today’s build gives us our 12th data point in how much space Reserved Storage is using in 19H1.

As you can see, the last few builds have really stabilized the amount of these hard drives that are being set aside for Reserved Storage. This feature should help prevent a lot of the update issues that occur during Windows 10 updates that run into a lack of storage space to manage the data that is moved around during the upgrade process.

Of course, Reserved Storage will not help you move to the Windows 10 April 2019 Update, but when the 19H2 feature update comes out later this year, it will kick into action and assist in managing that available disk space.

The latest data points for Skip Ahead builds being released for Windows 10 (20H1) are here.