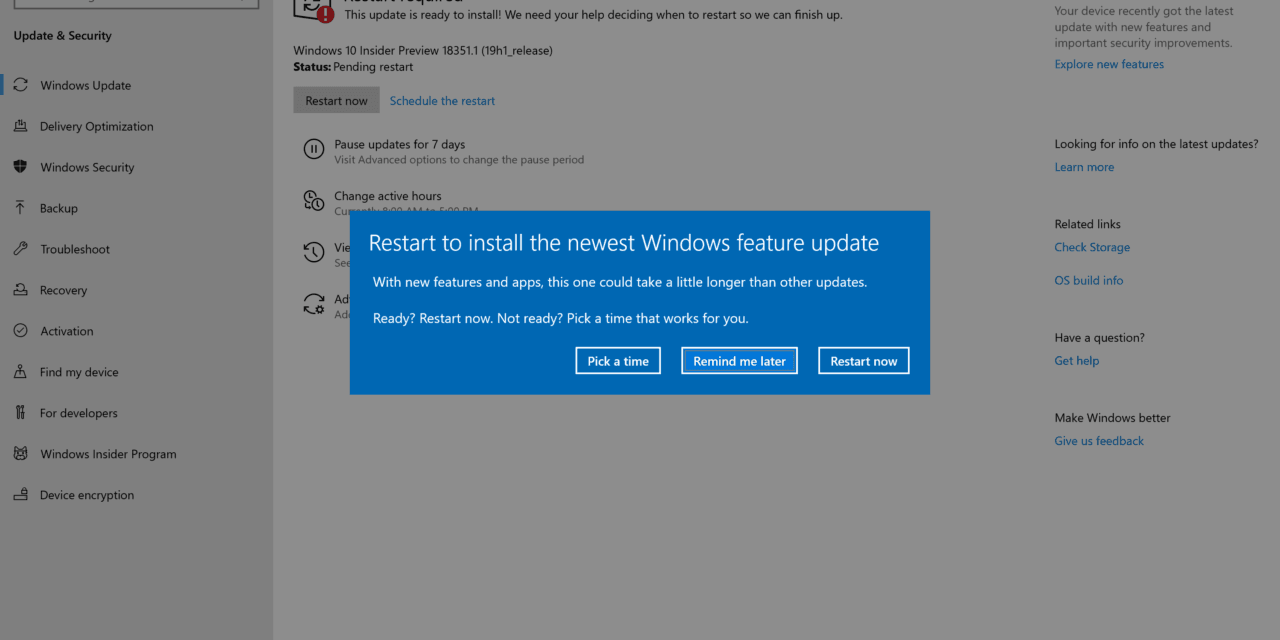 We seem to be settling into a predictable pattern over the last few weeks as final work on the upcoming April 2019 Update continues through the Windows Insiders Program.

That pattern has included two weekly Fast Ring builds for Windows Insiders and this week seems to be on that same track.

The release of Windows 10 (19H1) Build 18351 into the Fast Ring yesterday, with a focus on bug fixes and stability, continues the approach we have seen with past feature updates. I expect we will see an additional Fast Ring build later this week along with another Skip Ahead build for Windows 10 (20H1) incorporating the various fixes in the code base for the first feature update of 2020.

So that leaves us with continuing to track the disk space being used by the Reserved Storage feature that was introduced as part of Windows 10 (19H1) late last year. This is now our 10th data point in the Fast Ring for how the extra storage space is configured.

As a reminder, Reserved Storage sets aside an adequate amount of disk space on your system so that future updates do not run into a lack of disk space as the upgrade is in progress. The amount of space that is set aside will vary based on your usage, the number of apps you have installed and how much storage space you are using for files.

Here are all those Reserved Storage data points for Fast Ring builds of Windows 10 (19H1):

There was one other thing that happened alongside the release of Windows 10 (19H1) Build 18351 to the Fast Ring yesterday. Last week, the first Slow Ring build for the 19H1 feature update was released to testers. That release, Build 18342.8, was a serviced Slow Ring build for Windows Insiders.

This week, the ISO’s for this first Slow Ring build have been released and they are available for download from the Windows Insiders website.

As you can see from the ISO download menu, the ISO shown for download is Build 18343 and not 18342.8. As noted by members of the Windows Insider team on Twitter, these builds are the same exact code so if you are already on Build 18342.8 there is no need to install 18343. However, if you want to join the Slow Ring, you can go ahead and download the Build 18343 ISO and install it on your system for a clean install and still be testing in that ring.

Are you testing in the Fast or Slow Ring as Windows 10 (19H1) wraps up development? How are these final builds looking for you when it comes to install and functionality?