If you count the major builds and cumulative updates that have come out since its initial availability, the Windows 10 May 2019 Update had 45 public testing builds pushed out between July 2018 and May 2019.

With public testing wrapped up, including nearly a month in the Release Preview ring, the Windows 10 May 2019 Update began its public roll out earlier this month. This feature update, the seventh overall since Windows 10 was released nearly four years ago, delivers the normal batch of enhancements and a few of them are very consumer friendly.

Here are your options for getting this update on your current Windows 10 devices. By the way, it never hurts to backup your data as a precaution. The upgrade process is pretty stable but the backup is for those unexpected bumps that can happen along the way and it is always better to be safe than sorry.

Your first option and the most stable choice would be to just wait. Microsoft has been using machine learning to evaluate the readiness of various devices and hardware for a couple of upgrade cycles and they are doing that once again for the May 2019 Update. Once your hardware is cleared, the update will be offered to you on the update page at Settings>Update & Security/Windows Update.

The big change with this feature update, and this will be the same experience if you are on Version 1803 or 1809 which have the May cumulative updates installed, is that it will not be installed automatically. Instead you will have control over when you download and install the update. 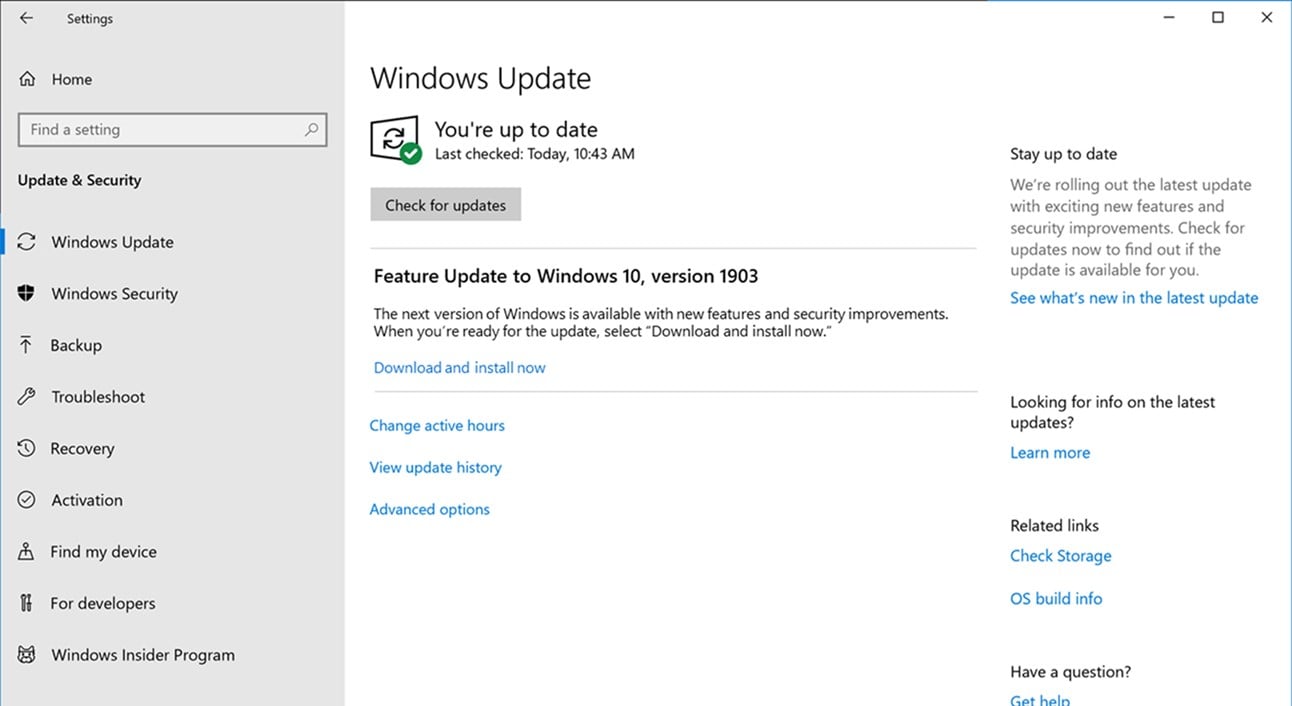 As you can see in the above screenshot, the May 2019 Feature Update will be shown on the update page when you click Check for updates but not downloaded with other updates for your device. Once your device is eligible/ready for the feature update, the Download and install now option will be shown. Just click that link to begin the installation of the feature update. If you don’t want the May 2019 Update just yet you can continue downloading other updates without it installing.

If you would prefer not to wait for the automatic availability, you can initiate the install of the Windows 10 May 2019 Update yourself by visiting the Download Windows 10 page.

Just click on the Update now button and the process will begin. Follow all the prompts and your device will be upgraded in place with your apps and data making the migration along the way.

The second manual option for getting the Windows 10 May 2019 Update is available on the same Download Windows 10 just below the in place upgrade option shown above.

When you click the Download tool now button, the MCT will be downloaded and gives you a couple of options to upgrade or clean install the feature update:

If there is a blocking reason for your device that could potentially cause issues, you will not be able to complete these manual updates because your device will be scanned for those issues.

If you find yourself blocked from manually installing/receiving the May 2019 Update, you can use the new Windows Release Health Dashboard to see what might be causing the block.

The new dashboard is part of Microsoft’s efforts for more transparency around feature update releases and includes current known issues and those issues that have been resolved over the past thirty days.

Included in that information you will find:

My recommendation is that you review this list before you think about installing the May 2019 Update because it might save you some headaches later on down the road.

Good luck and enjoy the update. Don’t forget, Windows 7 end of support arrives in less than eight months so maybe now is the time to make the jump to Windows 10.