The way in which end users get new feature updates for Windows 10 has changed significantly with the release of the May 2019 Update last month.

This feature update, the seventh overall since Windows 10 was first released almost four years ago, no longer automatically downloads when a user manually checks Windows Update on their device. Instead, a notice is posted on the Windows Update page to indicate the update is available and leaves it to the user to initiate the download and install process.

This new process will be available on Windows 10 devices running both the April 2018 Update and the October 2018 Update that was released last year.

Microsoft has also added a new tool, the Windows Release Health Dashboard, that tracks any known issues with the feature updates roll-out. Listed here you will find anything blocking the update or issues that have already been mitigated.

This week, Microsoft updated that dashboard to indicate the expansion of the May 2019 Update’s roll-out:

Windows 10, version 1903 is available for any user who manually selects “Check for updates” via Windows Update for all devices that do not have a safeguard hold. If you are not offered the update, please check below for any known issues that may affect your device. The recommended servicing status is Semi-Annual Channel.

We are now beginning to build and train the machine learning (ML) based rollout process to update devices running the April 2018 Update, and earlier versions of Windows 10, to ensure we can continue to service these devices and provide the latest updates, security updates and improvements.

So this news sent me to my wife’s HP Spectre x360 (2015 model) which is on Version 1809 to check Windows Update for the May 2019 Update. Up until this point that device had not seen the latest feature update.

As you can see in this screenshot, Windows Update did not automatically start downloading the May 2019 Update when I checked for updates. Instead, it showed it was available and left the option to me as the end user to begin the upgrade process. Exactly what was expected to happen. I started and successfully completed the install from this point on the device.

On a side note, one of my Twitter followers Eli shared this image on Twitter for one of their devices:

It seems Microsoft might be using this as a way to inform some end users that the latest feature update is not available for their device due to a safeguard hold. Personally, I like this as an advanced user but I am not sure this will impact everyday users who are rarely heading out looking for feature updates already. Still – a very clever way to communicate about the feature updates availability.

After upgrading my wife’s laptop to the May 2019 update I decided it was time to pull out my three tablets running Windows 10 and see if the May 2019 Update was being made available to them. These devices are all use Atom processors, varying amounts of RAM, and just 32GB of storage. They are very low-end devices but are great for testing the advancements made by Microsoft to upgrade devices with these very low-end specs.

The three tablets are the HP Stream 7, NuVision TM800, and NuVision TM101. The first two were able to detect the May 2019 Update in Windows Update and subsequently download and install the feature update. It did take a couple of hours but on devices with these specs that was not unexpected. The 10 inch TM101 is fully updated using Version 1809 however, it is not being offered the May 2019 Update yet so I will need to keep checking back on that one.

I could, of course, force the update using the Media Creation Tool (MCT). Since there is no rush to get the device on the May 2019 Update, my plan is to check the device weekly for the May 2019 Update. Based on the other two tablets successful upgrades, I expect this one will not be a problem either. When you consider that these tablets were near impossible to perform an in-place upgrade just a few feature update cycles ago, the work of the update team has been quite successful.

In the screenshot gallery below, I have posted shots of what the various stages showed me on the NuVision TM800 so you can get an idea on how the process will go once you get offered the May 2019 Update. 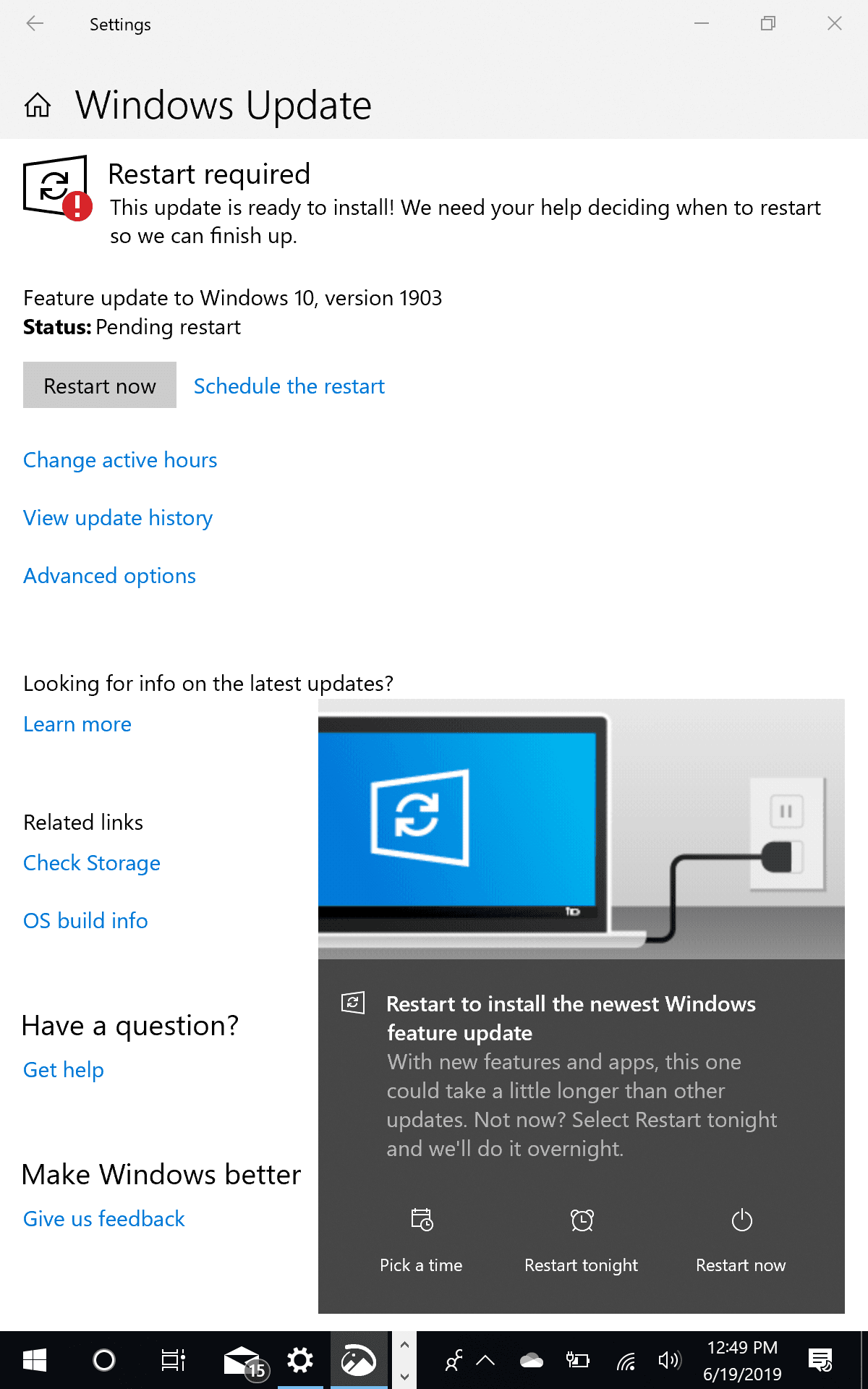 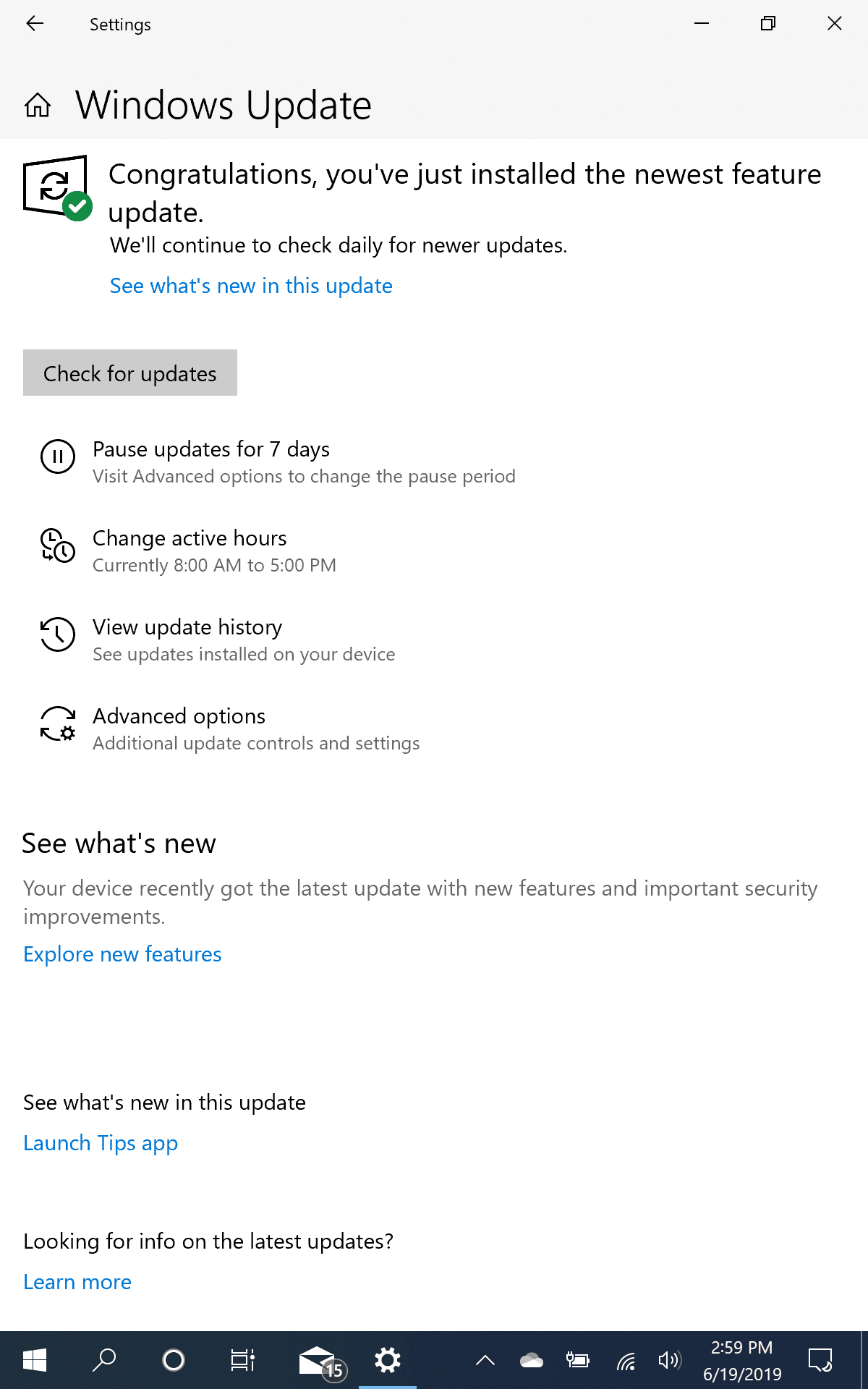