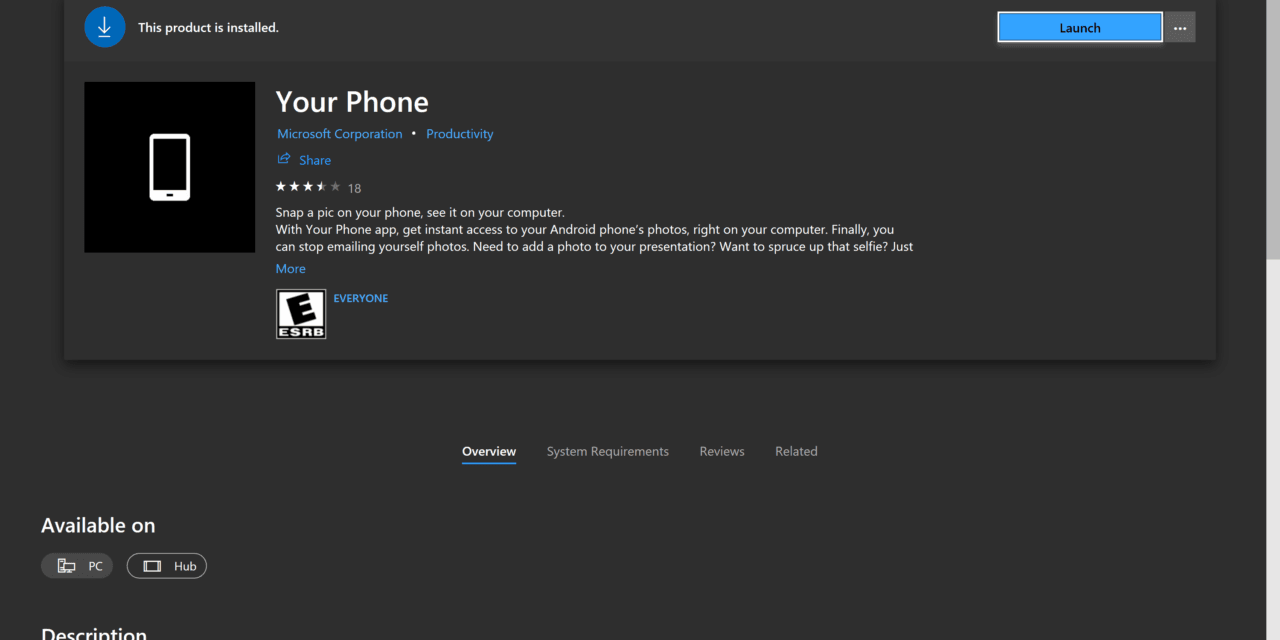 This was communicated via a tweet from Vishnu Nath, Head of Program Management for Microsoft Mobility.

#YourPhone folks on 1803, we aren't quite ready for you yet. We will be back once we are! For now we would love your feedback on WIP.

If you already have the app installed on 1803 and paired with your Android phone, it will continue to work – at least for now.

In the last 24 hours,  Microsoft has made their upcoming Your Phone app available to users on Windows 10 Version 1803.

Previously this app was only only available to Windows Insiders who were testing pre-release builds on the Fast Ring for Redstone 5 or Skip Ahead builds for Windows 10 19H1.

The availability of the Your Phone app for the production version of Windows 10 is a very strong indication that the apps functionality is not OS dependent. This is a good sign for end users as we approach the final development stages of the upcoming Windows 10 feature update code named Redstone 5. That update is expected to be released in the September/October time frame.

By making the Your Phone app capability available in an app rather than embedded into the operating system, Microsoft is not tied to completing the feature before the Redstone 5 feature update is released. It is very early stages for the Your Phone app as it only contains the capability to handle images from a connected Android device running the Microsoft Apps app at the moment. Ultimately, as demoed by Microsoft back at Build 2018 earlier this year, Your Phone will have the ability to handle not only imaging from your phone but also messaging and alerts/notifications.

A subset of this functionality will eventual be made available to iPhone users but there will be limitations because of Apple’s tighter controls for accessing this type of data on the device. Currently there has been no timeline given for when iPhone users will be able to use the Your Phone functionality.

However, we have been giving indications that the messaging capabilities for the Your Phone app and Android devices is  very close to being available. In fact, the current version of the Your Phone app has the UI for this part of the app but it is not activated as of this morning.

One big example of an app that had a long preview period is the recently released Microsoft Whiteboard app so this is not foreign territory for Microsoft to actively develop an app in preview mode.

Are you using Your Phone yet? If so, what do you think so far?

Note/Update: Since posting this article I am learning that you must be a registered Insider to use Your Phone on production versions of Windows 10. Otherwise, it will not work properly when you try to connect.