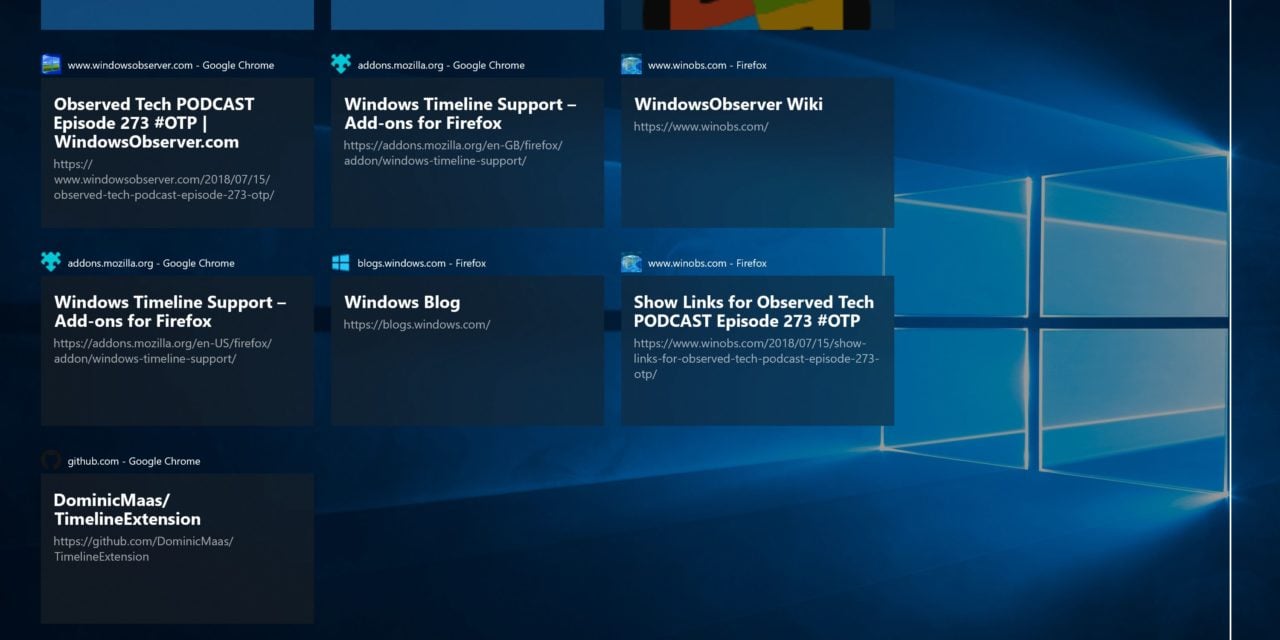 Windows Timeline was the big ticket feature included in the Windows 10 April 2018 Update. Using the Microsoft Graph, activities that you do on any Windows 10 device running the latest feature update for Windows 10 will be synced across all of your Windows 10 devices. This is a very handy feature for picking up where you were browsing on another device or searching for somewhere you had browsed in the past.

By default, Microsoft Edge and applications like Microsoft Photos, Word, Excel, PowerPoint already support the Windows 10 Timeline.  However, support for Windows Timeline, which uses the Microsoft Graph to collect and share this data across your Windows 10 devices, must be added by the developer. However, for whatever reason, since the debut of Windows Timeline there has not been a lot of developer support for the feature.

While we wait on the Windows Timeline ecosystem to expand across other apps, a developer has released beta versions of an extension called Windows Timeline Support for both Firefox and Chrome. By signing into your Microsoft Account once these extensions are installed, your browsing history will be added to your Microsoft Graph and become available on your other devices using the same account.

Once installed, setup for the extension in both browsers is the same with two key settings. The first is logging into your Microsoft Account so that data can be accessed and shared into the Microsoft Graph. The second is to select the number of seconds a page must be displayed in the browser before it is shared to Timeline. The default is eight seconds but for myself I adjusted this down to five. It can also be set to a higher number if you choose.

Besides sharing your browsing data into the Microsoft Graph, the Windows Timeline Support extension for both Chrome and Firefox include the ability to open the current page you are browsing on another device. This is accessed by clicking the Windows Timeline Support extensions icon in the browser and then selecting the Open this page on another device menu item.

List of target devices in the Windows Timeline Support Extension

Since you have already granted permission for the extension to access your Microsoft Graph data it knows about your other Windows 10 devices using the same Microsoft Account. That is where this list of target devices in the extension is gathered. Just select the device you want to target and the page will be opened on that device. Note: It will open up in the default browser on the other device and not in the same browser you might be viewing the page in. You will also notice some devices listed here that can not read/view webpages – obviously those are not valid targets – but this is a beta and a work in progress.

I will say this though – browsing data synced very quickly across my other devices and appeared in the Timeline ready to be searched and used. These are great extensions at this early stage and I look forward to watching their continued development. They are open source as well, so anyone can contribute to that development process over on GitHub.

Download the Windows Timeline Support (Beta) extension for Chrome or Firefox and let us know what you think.

Note: Be aware that if you use Firefox’s Private or Chrome’s Incognito browsing modes that any activity in those sessions will show up on your Timeline. The developer has posted this as a known issue and expects to release an update to the extension this week to hide that private browsing from the Timeline.