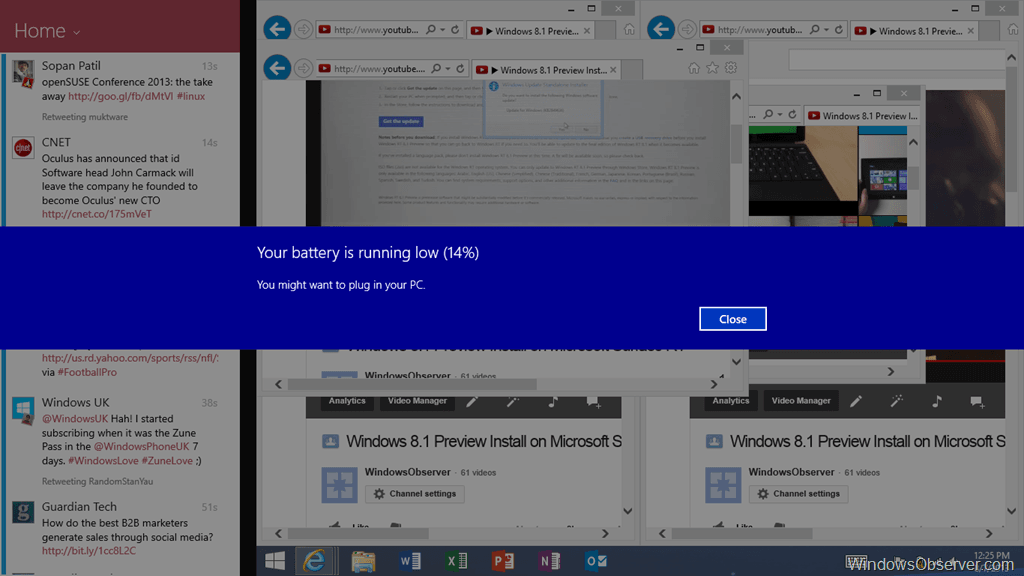 Last fall, shortly after picking up my Surface RT, I wrote about an apparent bug in Windows RT (8 RTM) that failed to alert a user that their battery had dropped to critical levels.

Without the warning the system simply shuts itself down as soon as the critical battery level is reached with no chance to save your work, etc.

After some discussions on Twitter about this at the time, which ultimately prompted my own testing of this issue, I was able to reproduce the lack of warning and the systems immediate shutdown.

As you can read in my post after these tests I was able to circumvent the bug and get prompted about Low and Critical battery levels by changing the alert levels in the Power Settings.

So why bring this back up while testing the Windows 8.1 Preview?

Well because it happened to me unexpectedly earlier today.  I was using my Surface RT and knew the battery was getting low however, when it reached the default critical level the machine just shut itself down. Luckily I was not working on anything that needed to be saved but it still caught me off guard.

So I charged my Surface RT up a bit and then removed power and changed my default Low Battery level to 15% and my Critical Battery level to 6% in the Power Options>Advanced Settings>Battery settings.

I set the screen to never go off, turned on Twitter in a snapped view and started a loop of four YouTube videos to drain the battery down.

When it hit 15% of battery left I got the alert I expected to:

I then continued to let the battery drain down to the critical setting of 6% and the device shut itself down.

So bottom line is that if you want the warning in Windows 8 or the Windows 8.1 preview you need to go into the advanced settings under power options and modify those levels.