Forza Horizon 4 Demo Available for Xbox One and PC 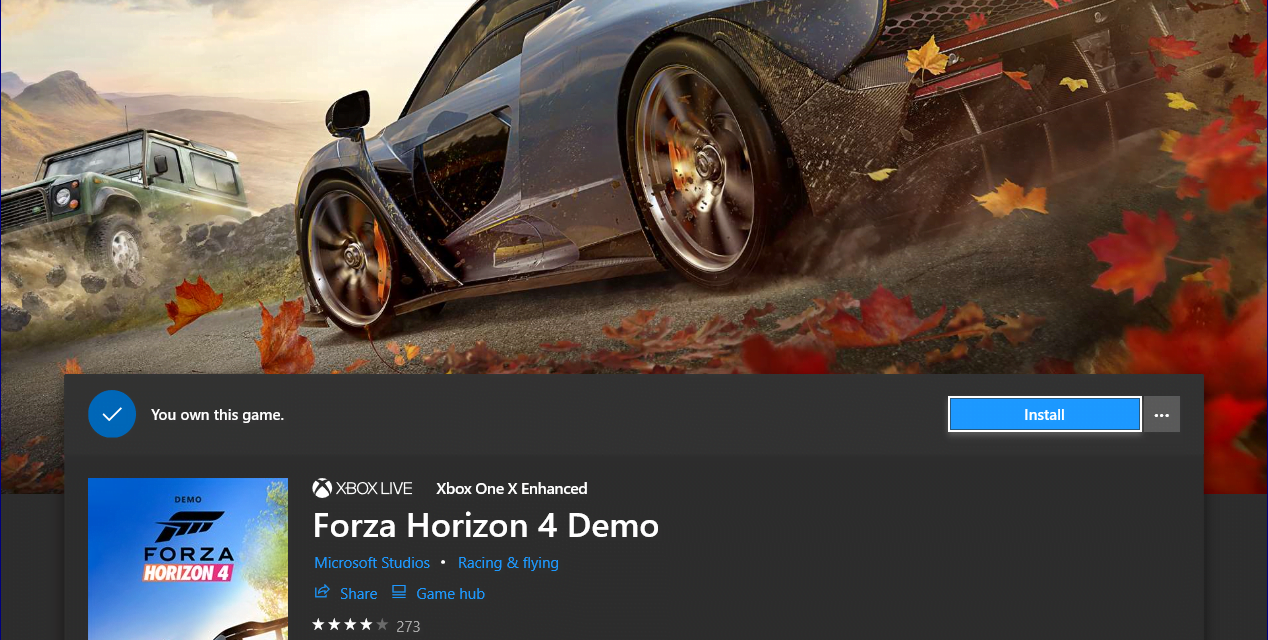 This week Microsoft has made a demo of their upcoming Forza Horizon 4 game available ahead of its release on 02 October 2018.

This fourth edition of the decidedly arcade but fun driving game is an Xbox Play Anywhere title which means it is available on Xbox One and PC. Buy it once and play it anywhere.

The demo download, which clocks in at 28GB, begins with what appears to be the same demo that gamers got to play earlier this year at E3. This introductory sequence takes you through the experience of driving in all four season which is the big new feature in this edition. No need to add an expansion like Forza Horizon 3’s Blizzard Mountain to have a snow experience because all four seasons will be part of Forza Horizon 4.

Once you have driven through the intro and all four seasons, you will get to make some adjustments to the game and then select your nickname in the game. Unfortunately, there are no custom names here but only ones that have been added to the games dialog so they can use it in the various interactions you will have with in game characters.

Then you get introduced to some of the key racing elements of the game including street, dirt, gravel and other surfaces. There are a couple of Danger Signs so that you can make some crazy jumps. Once you have finished all the guided races, there will be some speed traps, speed zones and drift zones to try out. You get a stable of about 8 cars to use in the demo at this point and can go back and re-do all the events as many times as you want.

Heads up – once you leave the demo, at least in my experience doing this twice so far, the demo resets and you have to go back through the intro and guided events to get access to all the extra events to try out. One side benefit of the demo is that you do get a nice Forza Horizon 4 t-shirt for your character to wear in the game.

If you are on Mixer and have your Microsoft account attached to that service, you can watch Forza Horizon 4 streams and earn influence that will be added to your characters profile once you begin playing the game after its release. Influence is used to help you achieve various in game goals and progress in FH4.

I recently switched to a 4K UHD/HDR10 TV, the 40″ Samsung MU6290 Series that is available at Best Buy for $329.99 – that is $120 off its normal price, and this game looks fantastic in HDR10 on the Xbox One S. I imagine the 4K experience on the Xbox One X is going to take that even further.

I have posted some screenshots from in the game below but they really do not do it justice. I also streamed about an hours worth of the game experience on my Mixer channel just to share what the game looks like.

In closing, the best thing about Forza Horizon 4 is that it feels familiar when it comes to the controls, user interface, etc. However, they have tweaked things in such a way to update the look and feel plus nifty cut scenes now hide the loading experience. This gives you something a little different to look at instead of a static loading screen. I am really looking forward to getting into the entire FH4 experience in a couple of weeks.