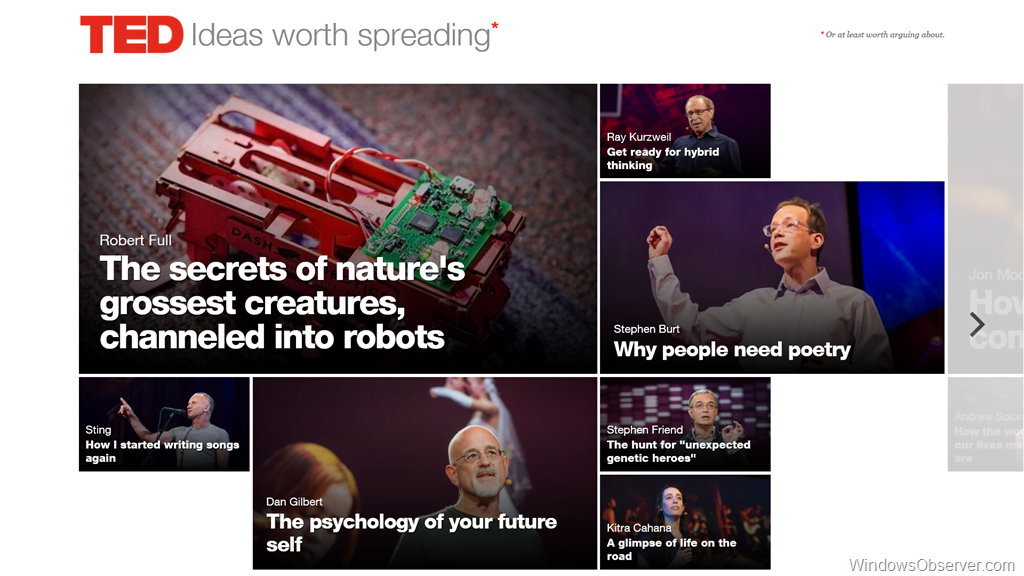 Each week we see more official apps make it into the Windows and Windows Phone app stores.

It is a confirmation that companies are beginning to see the value in producing these products for users of Windows and Windows Phone.

This week one of the big official apps to show up in the stores is from TED a non profit that is dedicated to sharing ideas in short talks.

TED is a global community, welcoming people from every discipline and culture who seek a deeper understanding of the world. We believe passionately in the power of ideas to change attitudes, lives and, ultimately, the world. On TED.com, we’re building a clearinghouse of free knowledge from the world’s most inspired thinkers — and a community of curious souls to engage with ideas and each other, both online and at TED and TEDx events around the world, all year long.

However, seeing official apps is great but if they are poorly implemented and are lacking basic features then they can be very disappointing.

Unfortunately, the official TED apps fall into that disappointing category. When you view inspiring things like TED Talks you want to be able to share them with others however both TED apps fail in this basic functionality.

On Windows there is zero capability to share talks from within the app.

On Windows Phone you can share to social networks but the quality of what is transferred to the sharing target is subpar.

This is disappointing especially from an organization that prides itself on inspiring people by sharing ideas.

If you want to try the apps out anyway here are the download links for each store plus a couple of screenshots:

Thanks to @eferron for the tip.