A closer look at the Best Buy Surface Trade In Program 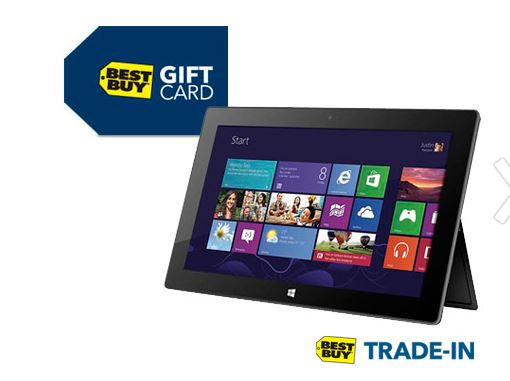 Since yesterday the headlines have been flashing the news that you can get at least $200 and as much as $350 to trade your 1st Generation Surface Pro or Surface RT to Best Buy in their recently announced Surface Trade in program.

Headlines are great but then again headlines are intended to draw you in to read the story and that $350 trade in value seems like a good deal but when you look at things just a bit closer you find all is not what it seems.

This is the reality of the Best Buy Surface trade in offer showing the condition and amount offered for all the 1st Gen Surface devices:

These offers are never intended to benefit the customer. Just like in a casino – the house always wins – and Best Buy wins in this scenario as well. In fact, the depreciation when you compare the trade in value they are offering to what the devices retailed for may actually be worse than that of a new car as you drive it off the lot.

I guess there are some folks who got their Surface Pro or Surface RT through the great deals Microsoft offered during Build and TechEd that would benefit from this trade in offer however, if you bought your Surface 1st Gen device at retail then you are probably better off selling the device on eBay or maybe Amazon.

Of course according to Best Buy’s small print details on this offer they do stipulate that trade in value may vary.

The offer runs until 21 October 2013 – the day before the 2nd Gen Surface devices hit retail shelves.

Update: Janet Tu (@janettu) just sent me a tweet and said that according to Best Buy the minimum trade in value is $200 until 21 October 2013 under this program. Thanks for the tip Janet!