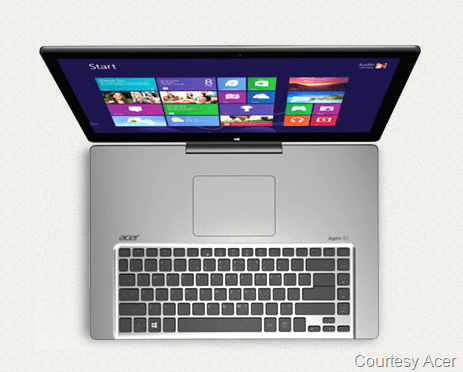 Last week Acer revealed some new hardware for Windows 8 and one of them was the Acer Aspire R7 which is a unique convertible style device that has a hinged screen that can be configured to work as a standard laptop, a tablet and as a touch and type device.

It does have a traditional laptop style track pad but it is most certainly not in the traditional spot on the device.

As you can see in the above product image from Acer the track pad has been pushed behind the keyboard and placed between the screen and keyboard in what Acer calls Notebook Mode.

Now there have been some to question this out of the box design idea but over the weekend I realized exactly why they made this change and I would not be surprised to see other manufacturers following this in the future.

Why would all other manufacturers choose to follow this radical design shift?

Well I believe it is to solve one of the biggest irritations of track pads on laptops which became an issue when track pads replaced the little nub cursor controls on laptops.

I mean who has never been working on a document on their laptop and inadvertently brushed against the track pad surface right? In turn that highlights a large area of text in the document and then the next typing motion replaces that entire area of selected text.  Or maybe that text is not highlighted but the cursor gets moved to another part of the document and your now typing in the middle of an entirely different paragraph.

If the Undo command had never been invented this may have very well brought the laptop using masses to a screeching halt.

However, we now have a solution thanks to the innovative engineering from the folks at Acer.

I wonder how long it will be before we see this from other OEM’s?

Note: I am being somewhat facetious here but also partly serious because this new layout really does eliminate the inadvertent mis-typing that brushing against the track pad can cause. Plus, I just dealt with this on my wife’s laptop over the weekend!