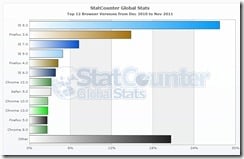 According to StatCounter and its global statistics service Internet Explorer’s steady drop in usage on a world wide basis stopped in November 2011 with a small increase from 40.18% in October 2011 to 40.63% for November 2011. There has not been any new releases of IE in the last month or two so I am not sure where that increase is coming from.  It will be interesting to see next month if this is a temporary bump or if the growth continues.

As you can see in the above graph Chrome has also surpassed Firefox for the first time globally (25.69% vs 25.23%) and it appears that trend could continue into the future.

Here is a chart from StatCounter that shows the distribution of the Top 12 Browsers world wide since December 2010.