Set Up Your Own Pseudo Picture Sharing Service 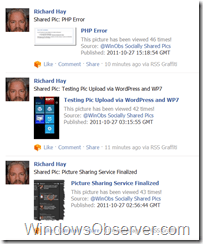 I am sure everyone remembers earlier this year when TwitPic changed its terms of service for the picture sharing website and the mess that came out of that.  Ultimately it came down to who owns your pictures or has any rights associated with them.  Personally I want to own my own pictures and exercise some control over when they are used anywhere.

Add to that mess the recent issues with TwitPic that many have experienced such as unavailable pictures, failed uploads, etc. and you start looking for alternatives.  It seems ever since Twitter rolled out their own picture and media sharing functionality that the service has gone downhill with TwitPic and other picture sharing sites.  Now, I did not agree with Twitter kicking a service like TwitPic aside after they really helped to establish the early success and abilities of the Twitter infrastructure.  However, it has started to have a noticeable impact on a lot of third party services TwitPic included. I have over 1,000 images stored at TwitPic so there is quite a bit of effort invested there I do not want to lose and ever since then I have been looking for a means to host my own pictures which I share across social media sites such as Twitter and Facebook.

Back in April I did the same thing by starting my own URL shortening service using the http://yourls.org/ open source software.  I did this about the same time that issues started to pop up with the bit.ly URL shortening service and the risk that it could go offline.  Again, I had quite a bit invested in that as well so I set up my own service to maintain control over my links so they do not go dead.

Your Own Pseudo Picture Sharing Service

The site I tracked down that helped me devise the setup I am about to share with you was A Whole Lot Of Nothing and a post Dave did back in July of this year. I opted to diverge from the way he set up things as I am on Windows Phone 7 and none of the Twitter apps I have found support a custom photo sharing ability.

The first step I took was to create a subdomain on this site called http://pics.windowsobserver.com and then did a clean install of WordPress there.

Next I installed the following plugins to the site:

Those are the only plugins you need to make a photo sharing service like this one.

As for themes I use the Atahualpa theme from Bytes For All because it is very flexible, customizable and allows me to have a minimalistic appearance to feature the pictures.  Ultimately this is up to you but I recommend keeping it simple.

So once you have those first three plugins installed how do you get your pictures from say your phone to Twitter?  As mentioned earlier, I use a Windows Phone 7 handset, so I am choosing to use the WordPress WP7 App to create a new post that just contains the picture.  The title of the post will prefix the link when it gets tweeted out. The nice thing about Windows Phone 7 is the integration to share images.

Here is a screenshot that shows I can share an image with the WordPress App:

When I tap on WordPress I am taken to the app’s main page to select the account I want to use:

In this case I select my Shared Pictures account and that will open up a compose window with the picture already attached to the post:

All I need to do at this point is to title the post – be descriptive about what the picture is for best results – and tap the Upload Key (the up arrow) and the post will go live to your picture sharing blog site. If you installed a plugin to tweet your new posts then it will also go out to Twitter.

Of course you could use your favorite mobile blogging tool for your handset and do the same thing for mobile picture sharing.

You could also log into the WordPress Admin Compose page via your web browser and do the same thing – all up to your personal preference.  Any valid blogging tool that will connect you to your WordPress site will also work.

This is the other place I want to share pictures and do be able to do it at the same time I post them to Twitter was my goal which I almost met.  I know Facebook apps and the integration with Windows Phone would allow me to upload the pictures and have them in my Facebook albums. However, that would be an additional step to share and I have already added enough extra steps to share in general and keep control of my images so I did setup a sharing to Facebook – via RSS.

I used RSS Graffiti to connect the RSS feed of my picture sharing site to my Facebook Wall and it checks the RSS every once in a while and sends a thumbnail and link to the picture’s post. Here is what they look like on my wall. Easily shared with my Facebook family and friends yet the picture remains under my complete control on the site.

As I said earlier, I realize I have added a few steps to the picture sharing process but I am ok with these extra steps because of the benefits this set up brings me.

I am sure there are other plusses and I am sure many of you can think of negatives as well however, this is a great solution, in my humble opinion, to get get away from third party services that could disappear at any moment.

What do you think? Any ideas to streamline this process? Looking forward to hearing what you have to say in the comments.