UPDATE: I heard back from Twitter today, February 28th, and have been informed the account was suspended for impersonation of all things. They also confirmed the account would not be restored. I shared my full response in a Twitter thread earlier today.

Ultimately, I never found out the specific reason for that suspension and suspected it was due to some of the automation I use to share tech tweets through that account and a process I have developed over the years. I will add, and as I wrote about following that suspension, the community response likely played a big role in getting that account restored in less than 24 hours. I did eventually hear back from Twitter about my appeal, but by that time the account was already back in service. Twitter never provided a reason behind the suspension.

When it comes to this latest run in with Twitter’s automated algorithm for monitoring and selecting accounts for suspension due to rules violations, I have been more quiet about it on my primary Twitter account. The reason behind that is because I am the person behind the suspended account but that is not a publicly known fact. I opted to keep this account as a secret identity to see how people interact with it over time. Everything about the account is valid and it is not unlike many accounts on the social media service.

My reasoning behind starting this new account was to chronicle the remaining days of official support for Windows 7 which reaches its end of lifecycle date on January 14, 2020. The account was created following the reaction to a tweet I sent on January 1st of this year on my @WinObs account when there were just 53 weeks of support left for the operating system.  It seemed like a popular subject so I opted to start an account for that process.

So the account, which was suspended four days ago on the 20th of February, uses the Twitter handle @Win7EndSupport.

Since its unexpected suspension, a visit to that link in the Windows 10 Twitter app shows me this: 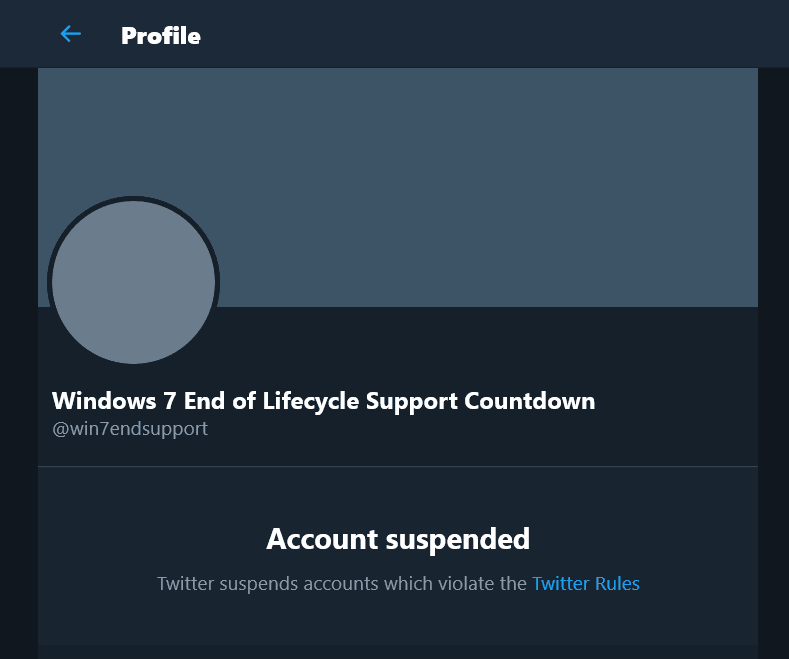 When I check on the accounts status on the official Twitter app for Android, I see this:

Of course, clicking on the link to read up about Suspended Accounts takes you to https://help.twitter.com/en/managing-your-account/suspended-twitter-accounts. That page lays out the potential reasoning behind account suspensions which include three main areas: spamming, account security, and abusive tweets or behavior.

Just like I said when @WinObs was suspended last November, I do not believe any of these apply to the @Win7EndSupport account. For example, here is the basic countdown tweet I – I mean was sending each day: 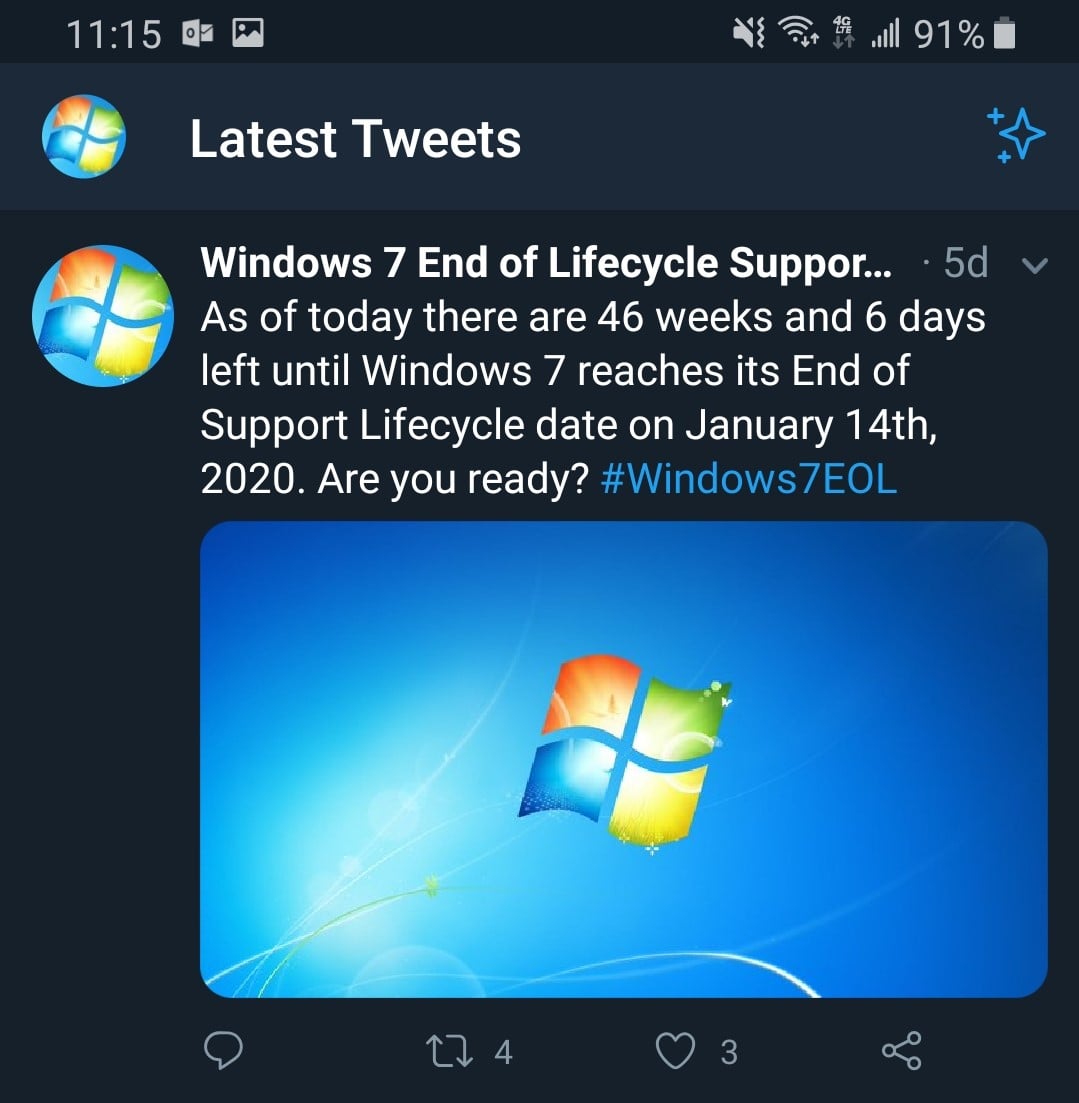 Each subsequent day that number decreases by one. In addition to this tweet each day, I was also sending out a Windows 7 End of Support Lifecycle Tidbit tweet: 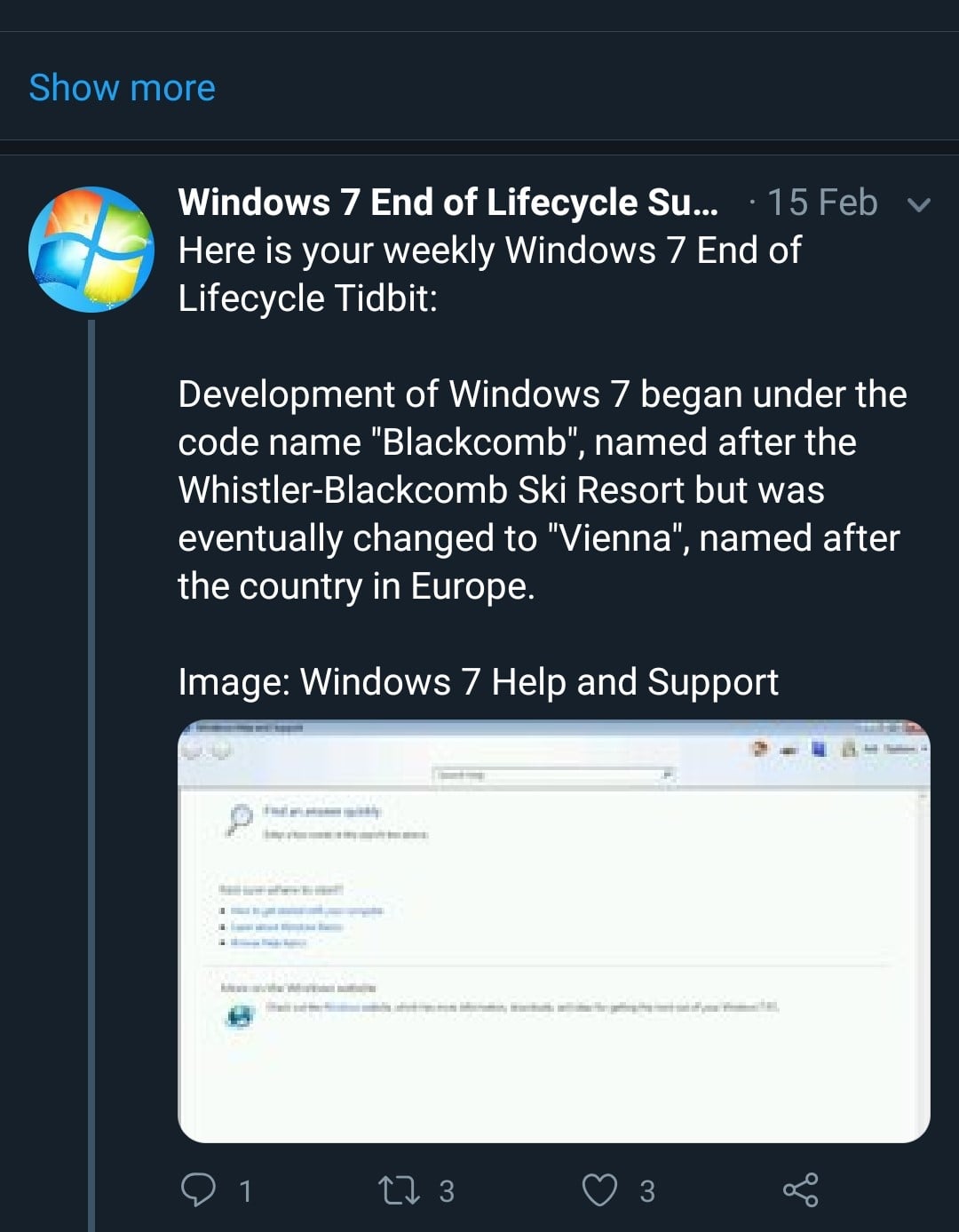 So why the suspension? To be honest, I am not sure. When these suspensions happen you are only pointed to a generic page that I mentioned above. General feedback never solves issues – just creates confusion.

Of course, it is possible that the automation process I use via Buffer to prepare and send these tweets each day could be interpreted as spammy, anyone looking at the page would see what is happening with the daily countdown to the end of lifecycle support for Windows 7.

However, that is not how it works with algorithms and artificial intelligence monitoring the potential for misbehaving accounts. This applies to all applications of algorithms and AI – not just those used by Twitter. Every once in a while, a human eye needs to look and validate that the system is suspending the right accounts or doing the right process it is expected to perform.

Look, I get it, Twitter deals with hundreds of thousands of accounts that misbehave. Sometimes non-offending accounts get caught in the efforts to keep things squared away. It is a tough job and technology should be used to its utmost capabilities to help address these issues but it is also not OK that behaving users get swept up in these attempts to keep the service free of spammy, low security, and abusive accounts.

I have submitted an appeal of this accounts suspension and I am not sure how long it will take to hear back from Twitter. Even then, much like the suspension of @WinObs last fall, even if/when the account is restored, I am not sure that there will ever be a specific reason for its initial suspension.

For now it continues to be a waiting game.