I hope everyone had a chance to heed the warning about the closing of the Windows 10 magic window. Yesterday, with the release of Windows 10 RS5 Build 17661, Microsoft merged both the Skip Ahead and Fast rings. That means the same build will now be pushed into those two rings when updated testing builds are released.

This will be the case moving forward for the RS5 development cycle.

Earlier this week, the Windows 10 April 2018 Update was made available for download to those looking for it. Next week it is expected to begin its automatic roll out via Windows Update.

Now that the fifth feature update is public, it is now time to begin testing Windows 10 RS5 with more Windows Insiders. The release of Build 17661 into the Fast Ring opens that testing up to about 25% of the entire group of more than 15 million Windows Insiders.

The biggest feature that has been present since the initial Skip Ahead builds is Sets. However, with the release of Build 17661 yesterday, Microsoft has introduced a remake of the screenshot/snipping process for Windows 10.

Note: Some of you may be experiencing a stalled point in the upgrade process to Build 17661 that shows you stuck at 100% while preparing to install. This is an issue Microsoft is aware of and they are working to resolve it. In the interim, just let your device sit there and work through the stall. I did this on three bare metal upgrades plus in one VM and it did eventually complete without further issue. I have read some reports that people who opted to reboot their systems had mixed results.

So let’s run down some of the new enhancements that are in Build 17661 as testers begin poking around in the update.

Note: The various builds we get for RS5 are pre-release builds. That means no feature is guaranteed to make it into the final RS5 release this fall. However, feedback and usage can help bump their potential for inclusion.

You get the new Snipping Toolbar on screen using several methods. The first way is through the new Screen Sketch app. By using it you grab your screenshot or snip and it is immediately opened in the app for annotation, sharing, and saving a copy.

The keyboard shortcut WIN + SHIFT + S is the default set of keystrokes for opening the Snipping Toolbar. This overlay gives you three snipping options.

The snipped image is also in your clipboard so it can be immediately shared in other apps/programs by being pasted using the CTRL + V keyboard shortcut. This is great for sharing quick screenshots/snips to things like social media.

If you are on a device with a compatible pen such as the Surface Pen there is a new option for you. Just go into Pen settings at Windows Settings > Devices > Pen & Windows Ink > Pen Shortcuts. There you will find a new option for when you click the button on the top of your pen to open the Screen Snipping toolbar overlay.

Finally there is one last option to open this overlay – a new Quick Action button in the Action Center.

For me the update is a very welcomed refresh of this process because I am always using screenshots and snips. I look forward to seeing how this moves forward because I see an opportunity for integration with the Cloud-Powered Clipboard if that feature makes its way into RS5.

I know I fawned over the new snipping experience like a fan boy but there are some other tweaks in Build 17661 for testers to check out:

The road to RS5 is just beginning so expect new features and enhancements with each subsequent build.

Enjoy the testing because there is a great opportunity to influence the direction of RS5 in these early stages.

Windows Ink Workspace Alongside of the Screen Sketch App 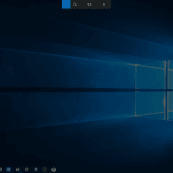 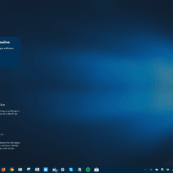 Timeline in Build 17661 with Acrylic Effect 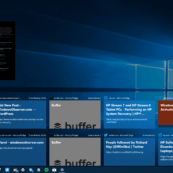 Timeline in Build 17134.1 without Acrylic Effect 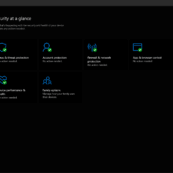