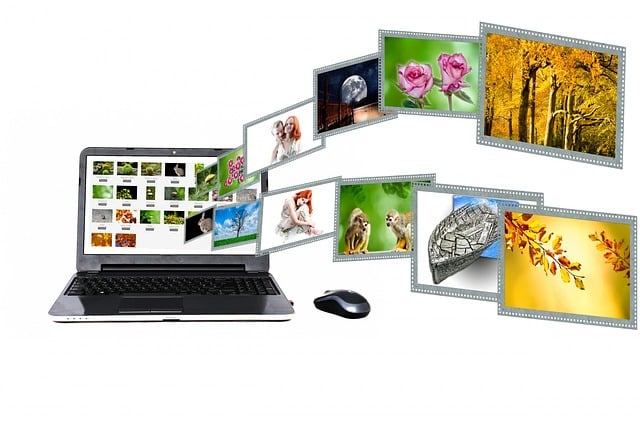 This build is the ninth overall that has been released since Microsoft created a Redstone 4 Skip Ahead branch before the release of the Fall Creators Update (FCU) and it is the second build made available to testers since the FCU was released last month on October 17th.

This latest build has added some enhancements and new features and there is one I want to discuss here today. In fact, I was so eager to try this feature out that I went against my own recommendations this early in a new development cycle and converted a second

This new pre-release feature is called Near Share and is basically the equivalent of Apple’s Air Sharing. Near Share enables you uses Bluetooth to transfer files between nearby devices. Since both machines need to be on RS4 Build 17035 you can see why I switched a second piece of hardware over to RS4 for testing.

Near Share is not turned on by default and it requires Bluetooth to be active.

So you get started with the setup procedure by heading into Windows Settings>System>Shared experiences on the device you want to use for this purpose.

There is one toggle switch and then two choices available for configuring Near Share.

Of course, once RS4 is released next Spring, this compatibility will be with any device running the Spring 2018 update for Windows 10.

After toggling on the feature for the initial system and selecting to enable sharing only between my devices, I went over to my second RS4 test device, opened up the same settings page and turned Near Share on there.

Now you are ready to share files and websites between devices.

Near Share is integrated into the Windows 10 Share Dialog and it appears between the People and App sharing areas. Just select the device you want to share to and it will initiate contact through an alert in the Action Center and requires an acknowledgement and acceptance to receive the shared item. This is good because it means someone cannot send a file or link without your permission.

After the transfer is complete the alert will remain in the Action Center with options to open, save, or decline what was shared.

Check out the gallery below to see the process, dialogs, and alerts you will encounter using Near Share. 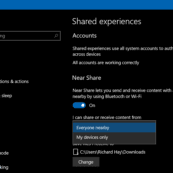 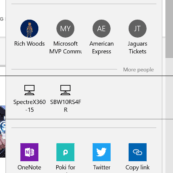 Sharing Dialog with other devices that can use Near Share 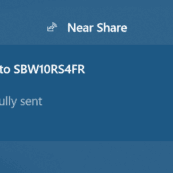 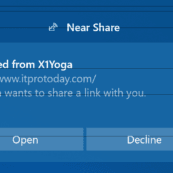 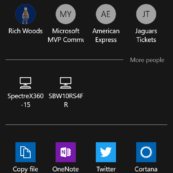 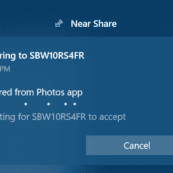 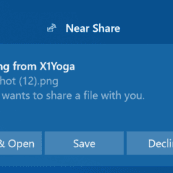 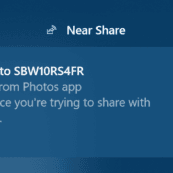 Declined dialog on initial device if shared file is not accepted