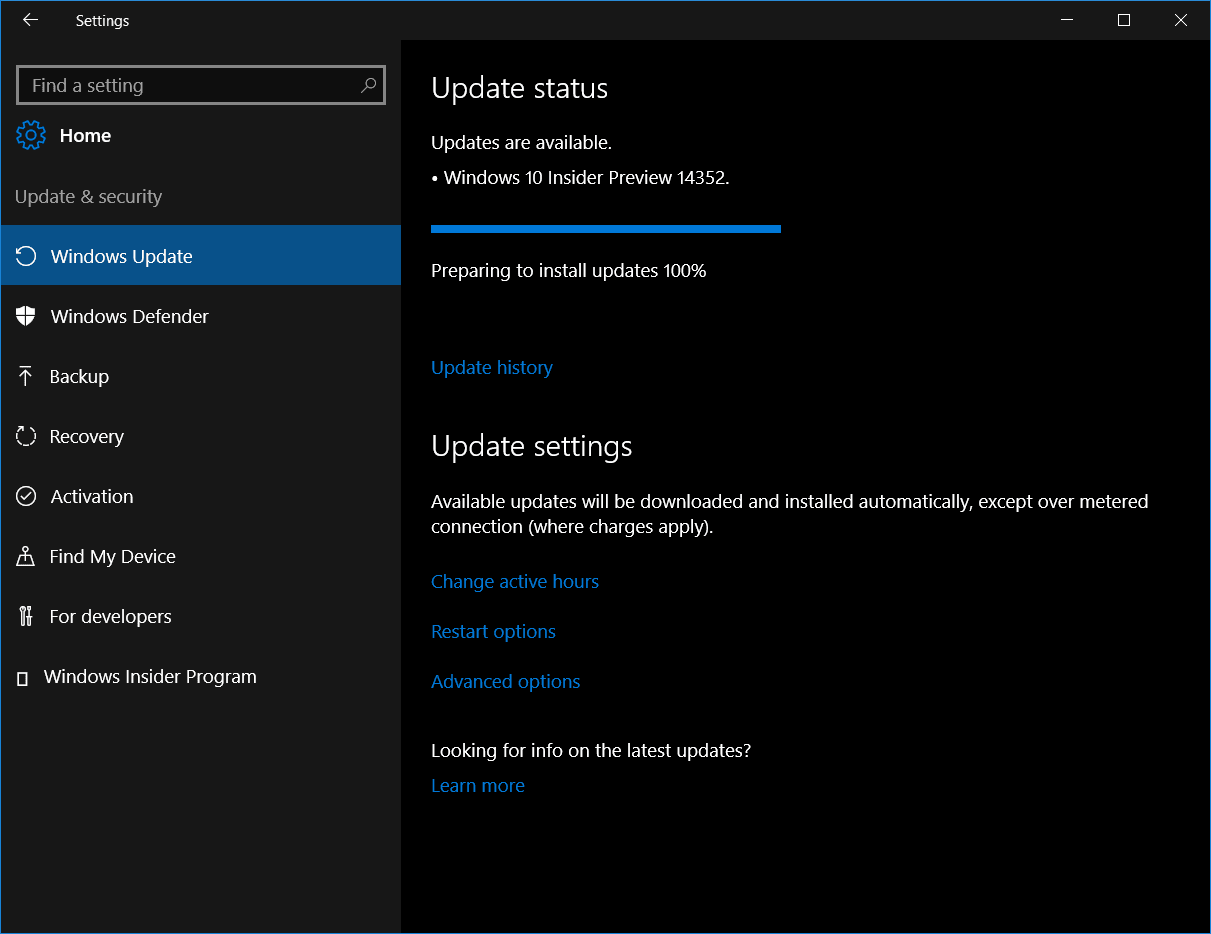 With just a little more than two months remaining until the expected release of the Windows 10 Anniversary Update, Microsoft has released a new build of Windows 10 from the Redstone development branch.

This updated is Build 14352 and is the first new release for testers since Build 14342 was released 17 days ago.

Considering the time left on the clock until the late July release of the Windows 10 Anniversary Update we are getting very close to a point where Microsoft will shift their focus to smashing bugs and tweaking the operating system for performance.

Back at BUILD2016 Microsoft shared a lot of details about new features that would be included in this summers update for Windows 10 and I believe the majority of those items have made it into testing builds.

In Windows 10 Build 14352 there are 23 fixes and just three known issues in this build so a lot of work is already in progress to smash the bugs from previous builds.

This build is not without some significant updates in several areas.

Commands have been added that allow you to ask Cortana to play music from your local files, OneDrive and your Groove Music Pass. This is also accessible from on top of the Lock Screen.

You can now start a timer with Cortana and then ask her how much time is left and to cancel it as necessary.

Sticky Notes now have integration with Cortana so you can create reminders from your notes and these will sync across devices. Other options now available with Sticky Notes include being able to write a phone number and it will be available for a phone call,  jotting down an email address will let you launch your email client, an inked URL can be used to launch Microsoft Edge to visit the webpage and written down bulleted items become a checklist.

The handy ruler in Windows Ink now has a compass to help you line up your cardinal or midpoints as it turns bold in those spots.

There are seven other improvements to Windows Ink that are listed on the Windows 10 Build 14352 announcement blog post. I am really tempted to install this build on the Surface Book to take adavantage of those but I might wait at least one more build.

The Windows Game bar allows you to do screen recordings on Windows 10 of your games, even for some non-game apps, and now it supports six more games for full screen recording.

Recently the Feedback Hub was made available for all versions of Windows 10 and with this build it now shows feedback from Microsoft engineers such as an item being Received, Proposed, Denied, Accepted, In the Works, Implemented, and Postponed.

These tags will give you a much better idea of how feedback is being used by the Windows team.

You can now upgrade Windows 10 Professional to Windows 10 Enterprise by just changing the product key instead of a complete installation of the operating system.

This is possible because all of the bits for the Enterprise version of Windows 10 are in the Windows 10 Professional and just need the key to unlock them.

For those of you who use third party anti-virus scanners this new setting allows Windows Defender to periodically scan your system.

Here is an explanation of the feature from the Microsoft Malware Protection Center:

When enabled, Windows 10 will use the Windows Defender scanning engine to periodically scan your PC for threats and remediate them.  These periodic scans will utilize Automatic Maintenance—to ensure the system chooses optimal times based on minimal impact to the user, PC performance, and energy efficiency—or customers can schedule these scans. Limited Periodic Scanning is intended to offer an additional line of defense to your existing antivirus program’s real-time protection.

According to Microsoft this has been implemented because their Malicious Software Removal Tool detects malware on 1 to 2 million devices each month even when other anti-virus software is used.

You are in control of the setting being turned on or off but something tells me some will take offense at this added security because it is not their first choice anyway.

Be sure to visit the Windows 10 Build 14352 announcement blog post and review the 23 fixes in this build and the short list of known issues.

If you are testing this build what is your favorite aspect of the update?