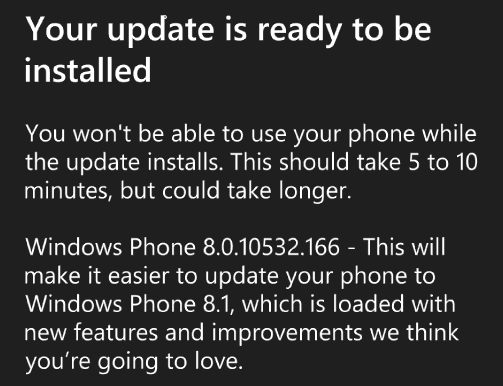 Well that certainly did not take very long.

Maybe Joe Belfiore waking up early prompted the release to start its delivery to Windows Phones around the world:

True story: fell asleep without setting alarm; just woke up & thought “Hmm, Its still just a few hours earlier than I wanted to wake up…”

Whatever the reason my timeline is full of enthusiastic Windows Phone users who are grabbing this update.

It appears there is a preparatory update to get your phone ready for Windows Phone 8.1 and then the main update itself. As soon as this update was installed the main update began downloading immediately.

The installation process seems to mirror past updates and does require a WiFi connection.

So what are you waiting for? Go get the latest and greatest version of Windows Phone 8.1.