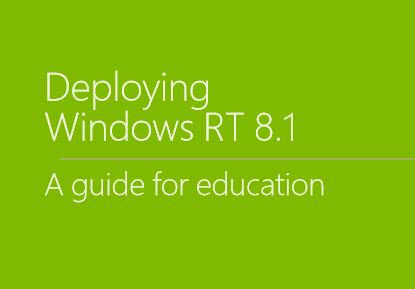 Microsoft has published a guide that provides step-by-step instructions on configuring and deploying Windows RT in an educational setting.

Surface and similar Windows RT 8.1 devices are great ultraportable, sturdy, and inexpensive devices for both students and educators; however, deploying Windows RT devices in schools is different from deploying PCs. This guide describes how schools can effectively deploy Windows RT devices. It helps you choose the right type of user account and automate much of the configuration process. It also provides sample Windows PowerShell scripts for both shared and one-to-one scenarios that schools can customize and extend to automate device configuration.

The 2.3MB PDF file is a 47 page document that covers areas such as:

According to the lead in paragraph of the document it is built on real world experiences:

This guide prescribes processes and provides a sample script framework that is specific to Windows RT device deployment in schools. It is based on observations from and work done at several schools deploying Surface devices.

It also acknowledges that deploying Windows RT devices is very different than deploying PC’s and those differences need to be taken into consideration when planning this type of deployment:

If you want to learn more about this evolution go ahead and download Deploying Windows RT 8.1 – A Guide for Education from the Microsoft Download Center.