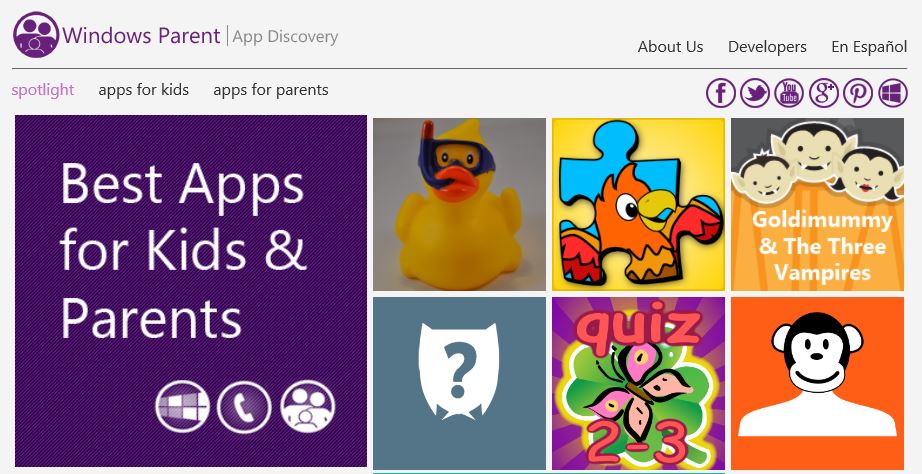 I first introduced you to Windows Phone Parent, a review site that is focused on Windows Phone Apps for kids and teens, in March 2012.

The app reviews and curation they do for Windows Phone apps really focused on family friendly apps and they have since added those same type of apps for parents as well.

Windows Phone Parent launched on November 2011 and to date is the only family-friendly app discovery platform for Windows Phone. In the last two years, they have significantly expanded their reach by launching several apps in the Windows Phone App Store with currently over 6,000 monthly app sessions, actively engaging in social media with more than 3,500 followers and launching the platform in Spanish, now called Familia Windows, which targets 17 Spanish-speaking app markets.

This week the folks behind Windows Phone Parent have announced a re-branding and the addition of Windows Apps to their collection of family friendly apps.

Expanding to the Windows 8 apps ecosystem is the logical next move for Windows Parent, given that many of the apps available on Windows Phone are also available on Windows 8. Furthermore, the Windows App Store does not have a dedicated category for kids and family, making it difficult for parents to find apps within the store.As an alternative, Windows Parent provides parents with the opportunity to discover apps in specialized categories, such as math or skill development, as well as age groups, such as toddler or preschooler.

Sandra Sears, aka @WPParent on Twitter, tells me the mission of the site has not changed with their re-branding:

The Windows Parent mission is to provide parents with an opportunity to discover Windows 8 and Windows Phone applications that enhance their lives or educate and entertain their children. We also aim to be an active participant of the Windows and Windows Phone ecosystem, by voicing the needs of parents and children to the developer community in order to encourage the development of high quality family-friendly apps. Additionally, we are committed to supporting the developer community by offering promotional opportunities within our platform so developers can reach thousands of parents in English and Spanish speaking markets.

If you are a parent concerned about the type of apps you allow your children to interact with in the Windows ecosystem then Windows Parent should be a regular stop on your search for new apps.