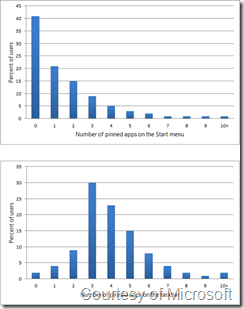 Steven Sinofsky has endorsed another blog post at the Building Windows 8 blog that talks about Evolving The Start Menu and the process Microsoft has used to make the changes that we see in the metro shelled Start Screen in Windows 8 Developer Preview.

This one is authored by Chaitanya Sareen who is the Program Manager for the Core User Experience for Windows 8 and worked on the Windows 7 experience as well.  This post is the beginning of a series to talk about this evolution of the Start Menu and begins – well – at the beginning.

We’d like to share a series of blog posts on the how and why of reimagining Start. This first post talks about the history and evolution of the Start menu, and several of the problems and trends we’ve learned from you. We think it’s always important to understand where we’ve come from before we talk about where we’re headed. We’ll then have another post that dives into how we crafted the new Start screen, and then we’ll see where the discussion leads us from there.

Right at the beginning of this post Chaitanya states that many people see this significant of a change in Windows as being disruptive and that is why they want the open dialog via the Building Windows 8 blog.

The debate around touch today is looking eerily like the debate in the 1980s over whether a mouse was a gimmick, a productivity time waster, or an innovation in the user experience. We say this knowing that many comments have been emphatic about the superiority of the mouse over touch. Unlike when the mouse was introduced—before desktop publishing programs came along there were few use cases for the mouse other than early paint programs—today we are surrounded by touch screens—at the airport, the gas station, the movie theater, every cash register, and of course, on our phones. The one place touch has not yet become mainstream is on the most capable of all the devices you use. Just like the introduction of the mouse, innovations like this do not happen without new OS support, new apps, and new hardware. We believe that, as with the mouse, we will see touch augmenting, but not replacing, most every aspect of the PC experience over time. Achieving this starts with the Windows 8 Developer Preview. So with that, let’s start the dialog about how things will evolve, not just in the Windows core user experience, but in hardware and apps as well.

Data presented in the post acknowledges that even the Windows 7 Start menu has its own challenges to users:

Based on the telemetry that Microsoft can collect from those who participate in the Customer Experience Improvement Program on Windows they show three very interesting charts on how usage has changed with the Start Menu between Windows Vista and Windows 7: On top of that the stats to show how many applications people pin to the Start Menu vice the Taskbar in Windows 7 is quite remarkable.  From my own use I definitely pin everything for quick access to the Taskbar and rarely use the entire Start Menu.  Most of the time I hit the Start Button and use the search feature to track down the program I want to use. In closing, Chaitanya states the following:

With the Windows taskbar becoming the key launcher and switcher for the desktop, and the Start menu being revealed as a poor everyday launcher, an opportunity appeared to reimagine Start and make it into something more valuable. Since we now know most of you can (and do) just use the taskbar to access the things you commonly use on the desktop, this freed us up to make Start even better at its unique strengths and to unlock new scenarios. Improved search, more room for all your programs, tiles that are alive with activity, and richer customization all suddenly become possible when the venerable, but aging, Start menu is transformed into a modern Start screen. Stay tuned for our next post, where we’ll talk about the Start screen and how it represents the way we use our PCs today.

I remember how people complained when Windows 7 came out and the Quick Launch Bar was dropped and replaced by the Taskbar.  Well this post and the data supports the concern about the Quick Launch disappearing because people wanted those icons right on the screen and within easy reach.  The same exact reason why Windows 8 will have the new Start Screen which puts quick access to programs at your fingertips.

It all makes a lot of sense doesn’t it?