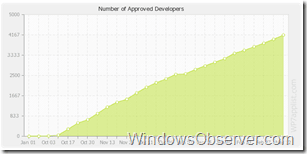 In just 4 1/2 months the Windows Phone 7 Marketplace has now surpassed 10,000 apps and the climb continues.

According to Leslie Horn over at PCMAG.com this mark has been achieved faster than any other app store.  Now she also mentions that the Apple App Store took just a little longer to hit their 10,000th app so this is not a run away win here but a consistent build up which is superb.

The other number that has continued a steady climb is the number of approved Windows Phone 7 developers.  According to enthusiast Windows Phone 7 Marketplace site wp7applist.com more than 4100 developers are in the system creating Windows Phone 7 apps.  You can see the steady increase since October 2010 below: Now these numbers are terrific and I think another sign that Windows Phone 7 is here to stay.  Now my next challenge is that app developers in general start to realize that there is an audience beyond the iPhone/iPad world that wants to be able to use your apps on Windows Phone 7.  It is frustrating to see an advertisement or tech story about the next great app and it is not coming out for Windows Phone 7.

On the other hand several big tech names have started developing for Windows Phone 7 such as flickr, Amazon.com, Adobe, eBay, Fandango, IMDB, USAA to name a few.

Other companies and tech services need to follow these companies lead and get started with Windows Phone 7 development of their stuff.  There is a growing audience for these apps and they will be grabbed up quickly if they are available.

I know the iPhone/iPad crowd is where all the money and customers seems to be but don’t look now because the Windows Phone 7 group is on their way.  How about making some apps for them too?