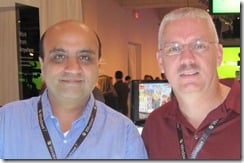 Well I am now sitting at Terminal 5 at JFK waiting for my flight home to Florida.  Hard to believe I just flew in last night, attended the Windows 7 Launch Party in NYC and am now heading home.  It was quick but it was also an awesome experience. Many thanks to Marcus Schmidt (@MarcusatMSFT) for extending the invite. Tarun and I at the Windows 7 Launch Party in NYC

I want to say thanks to Tarun Chachra (@tchachra) for attending the event with me and sharing the use of his MyFi device for connectivity.  I have been tweeting back and forth with Tarun for quite a while now and when the opportunity came to invite someone to come along to the launch party his timing was perfect with a tweet at that moment. We enjoyed lunch and a tech discussion before we parted ways.

During the event I got approached by Stephen Boots (@sboots) and he was very kind and complimentary about this website and my tweeting (@winobs).  Stephen is a Microsoft Windows Live MVP and we have crossed paths in the beta and butterfly forums.  Truly a pleasure to meet him finally.

If you followed along with my LiveBlogging the Windows 7 Launch posting you were able to see some updates throughout the keynote and demos.  I have posted all the photos I took on my flickr account and it includes not only keynote shots but also of some of the very cool hardware they had on display.

There were not many news breaking announcements during the keynote but I did pick up on a few:

Kylie from the Windows 7 ads introduces Steve Ballmer. Best moment of the keynote is when she gets on at him for being late this morning to meet her. He gave her a pink netbook with I am sure Windows 7 already installed on it.

Manufacturing Windows 7 DVD’s and Packaging Process in Louisville, KY. Why Louisville? There is a major UPS hub right there.

Disclosure: As we left we were given a goody bag from Microsoft that included several items that were also in the Windows 7 Party packs that were sent for Windows 7 Parties across the country. We had a pack of cards, a puzzle, a t-shirt, poster, media guide and 32/64 bit copies of Windows 7 in the Steve Ballmer Signature Edition packaging. The bag itself was one of the re-useable shopping bags.

Even if I had not received these things I would still be writing all this stuff about Microsoft – that is just who I am.  Need proof – look no further than this site :-)